It was a hard, ugly week of three unexpected deadlines that I had like 4 days to finish things (two of which got kicked back anyhow) plus a weekend to catch up on cover specs and story blurbs that I put off because I had to get these work things done. It’s like punishment for having a really nice weekend last weekend. Which also means I read nothing last week and I apologize. I’ll try to catch up.

More of These Haunted Hills. Josh has shown up at Brendan’s cabin to head out into the woods to put up fox monitoring equipment and wants to know if Brendan will accompany him.

“I just need you to hold tools and hand them to me.”

Brendan stepped past him so he could lock the cabin. Josh didn’t smell as good as he usually did. An acrid, nose burning scent clung to him.

“I have bug repellant for you.” Josh dug in the bag and handed Brendan a spray can. “And one of the carbon dioxide things.”

While Brendan sprayed his arms and legs – ah, that was the bad odor – Josh pulled a little device out of the bag. He handed it to Brendan and pointed to his belt to show what Brendan was supposed to do with it. He wished Josh hadn’t done that because it drew his eye to Josh’s hips. Brendan schooled his errant brain. You are not ready. That’s not what you’re here for. You’re just too damn lonely. 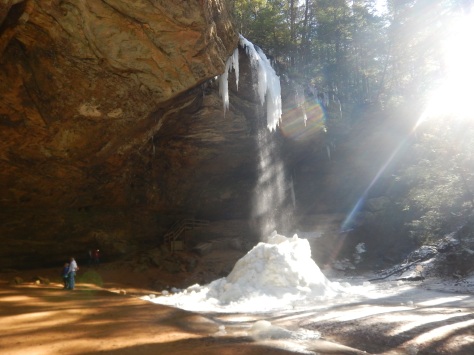 This is Ash Cave where Brendan and Josh first met (Only they met in spring. This is where I was hiking last weekend having fun)