Finally catching up. It’s been a week of stress and exhaustion, so much so even on a day where I was feeling fine, I walked into my local writers group and they all thought I was sick. Yikes. I do have good news. I’ve been selected as the Welsh fellow from my university and I’ll be going back to Wales to do research.

And my SF novella Modified and Sacred is now up for pre-order so I’ll be snippeting from there and return to These Haunted Hills later. As a brief introduction to the snippet, Addison was illegally modified to be underwater slave labor and was rescued by Captain Valdis and her sister. He know serves on her ship as an officer (Your typical Starfleet-esque space opera set up) and he’s been given his assignment, to guard and deliver the ambassador, Deveral, to a conference and Deveral is considered sacred by his people (hence the title, also I fear I’ll never get back down to six sentences with the way I’m going).

“An uncomplicated escort mission would be a nice change of pace. Besides—” He grinned impertinently at his captain, breaking his own self-edict of being emotionally controlled. “—how often will I get to talk to a living god?”

Valdis snorted, garnering the attention of her navigators. “Deveral is not exactly a living god. He’s Sacred Kin,” she reminded him, though he could be trusted to read the dossier. “The Fyrians believe their Sacred Kin hold a flicker of God’s power. That said, do be on your best behavior, Lieutenant. I’d hate for you to cause an intergalactic mission to go belly up if you act like your usual sarcastic self.”

Addison offered her a flat smile, recognizing the subtle reprimand hidden in those humorous words. He’d spent too many hard years outside the military. He hadn’t been broken to their respectful ways, not entirely. That was why he fought to improve his on-duty demeanor. “I’ll behave.” 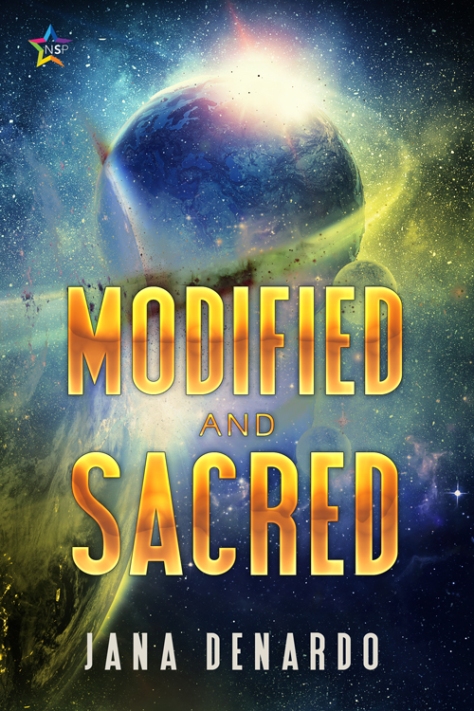 Lieutenant Addison Hunt is proud to serve the Confederation even if he still feels like he’s on the outside looking in. Addison was illegally genetically modified as a child, leaving him burdened with a sense of shame. Emotionally isolated from his fellow crewmen and recovering from injuries from his last job, Addison is happy to have light duty transporting an esteemed diplomat to a peace conference.

Deveral is one of the Sacred Kin, possessing a psychic ability that his people consider a spark of the divine. Like all the Sacred Kin, he’s led a sheltered life as a temple priest, but his heightened empathic ability makes him the perfect diplomat. Nervous to leave his home, he’s curious about his new companion, Lieutenant Hunt.

Not everyone wants the diplomatic mission to succeed, and a rebel faction poses a real threat to Addison and Deveral. Finding themselves cast adrift on a “lost” colony, they’ll have to fight to stay alive.