High school senior Van Liss is barely human. He thinks of himself as a scarecrow—ragged and unnerving, stuck and destined to spend his life cold and alone. If he ever had feelings, they were stomped out long ago by his selfish mother and her lecherous boyfriend. All he’s been left with is bitter contempt, to which he clings.

With a rough exterior long used to keep the world at bay, Van spooks George Curaco, the handsome new fry cook at the diner where he works. But George C senses there is more to the untouchable Van and refuses to stop staring, fascinated by his eccentricity. When Van learns that George C is even more cold, alone, and frightened than himself, Van welcomes him to his empty home. And ends up finding his heart.

Their road to trust is rocky and, at times, even dangerous. And looming evil threatens to keep them apart forever.

Fair warning: You may want to strap in. It’s going to be a bumpy ride.

Do us both a favor: check this out before you read
If you’re looking to read a story about a sassy teenage gay boy who refuses to behave until he meets Mr. Wonderful in Senior Honors Physics, and then is dazzled into improved conduct and future monogamy, I highly doubt this is the book for you. Believe me when I say you should close the book right now—drop it into a recycling bin if you’re all about keeping the earth green—and walk away. To this point, my life hasn’t run according to a predictable romantic formula. I don’t see a reason for this status to change.

Maybe you think you’re into something darker, so an unconventional story will suit your offbeat mood. News flash, reader: loners spend significant time in bookstores. I’m aware of the kind of books that consider themselves dark, at least in a carnal sense, and many are categorized as “New Adult,” just like this one. Between lewd front and back covers featuring tits, tats, and torsos, a threadbare plot is woven into a heavy fabric of inspired sex. You’re not likely to find that shit in here, either—but don’t I wish?

By now, you’ve probably noticed I possess a flair for the dramatic. Well, I look at it like this: creating drama staves off boredom. Not that I need to justify myself. But if you’re still with me, you’ve earned a shred of my respect. So on second thought, maybe you should keep reading.

Stick along for the ride if it pops your cork…

Friday
I towel myself off after my second, extremely necessary, shower of the morning. Mom’s cast-off pale pink towel is history thanks to unsightly smudges of black dye. Whatever. I did what I had to do, even if it was messy.

This morning, you see, I woke up and dyed my roots black. The urge to do it had been gathering steam for a few days—ever since the new kid started working at the diner. I picked up the dye on a rather compelling whim at the 24-hour pharmacy on the corner of Depot and Wilder Streets after work on Tuesday night. The rest is well-planned history.

I had to refer to a YouTube video so my roots would appear intentional, rather than a result of lazy grooming. And you may think I seem like a hot mess, but my crime against hair color has been done by careful design. Don’t delude yourself—I wasn’t going for the chic ombré look. Believe me, there’s nothing trendy about me. I want bold black roots with zero transition to the rest of my white-blond hair.

I glance in the mirror over the bathroom sink and see the male reverse of Cruella DeVil. And I smile, having achieved the “what the fuck’s up with his hair?” vibe I desire.

I suppose you want to know why I did it. That’s an easy one, and I think you’re going to appreciate my total candor. Drumroll, please: It’s because even if I’m a loner, I’m not heartless. I’m different, and I flaunt it, which is my way of keeping it real with the world. FYI: “Different” is my PC way of letting the public know I’m strange, frightening, and maybe even slightly dangerous. So, it’s better if that kid at the diner, and everybody else, looks away.

And you know what, boys and girls? I can help with that…

Here’s how: I dress like a Halloween scarecrow. Yeah, yeah… You’re wondering what, exactly, constitutes “scarecrow attire”? Go ahead, bookworm, google it. I did—I’m a visual sort of guy. You’ll see images of rigid figures, some stuffed with hay, others skinny as the barn boards they’re made of, clad in an unfortunate variety of secondhand clothing. I wear plaid flannel button-downs and overalls—yes, even to the wedding of a random second cousin last summer—peplum shirts of coarse fabric, and baggy, worn-out jeans, cinched at the waist by knotted burlap belts. Countless patches, Western bandanas, and an antique, oversized top hat finishes my retro cast-off style.

I laugh as I pull on today’s hokey duds. I’m not what you’d call the picture of fashion. In fact, I’d wager guys rarely fantasize about their boyfriends sporting dirty, patched overalls and a hat like Abraham Lincoln’s. But even if I take the hat off, you’ll see my new jet-black roots—hard as hell to appreciate on a bleached blond. Dedicate the hair color upgrade to that guy at work who won’t look away.

He probably considers himself eclectic and likes to think he appreciates life’s more unusual things. Or maybe he’s merely a Halloween maniac who is turned on by scarecrows with hair like straw. Incidentally, when I stripped my hair of color, I hoped it would further shock those around me into keeping their distance, but it seems to attract a certain fry cook.

I have fifteen minutes before I have to leave for the torture chamber most people refer to as high school, so I kneel in front of the coffee maker and brew a pot. I’ll check over my take-home Euro History quiz while it brews. No, I’m not a nerd, but I want better options for the future than I’ve had in the past.

Before you ask, I have my reasons for wanting to appear shocking to the point of repellant. And for the most part, I’ve gotten my wish. Teachers and students at school, coworkers and customers at the diner, not to mention Mom and Jake downstairs, all glance at the floor when I walk by. But this guy fixes his gaze on me. Maybe my unnatural black roots will scare him off, the way a good scarecrow stuck in a vast cornfield scares away so many crows.

I just don’t understand why he can’t see how frightening I am. 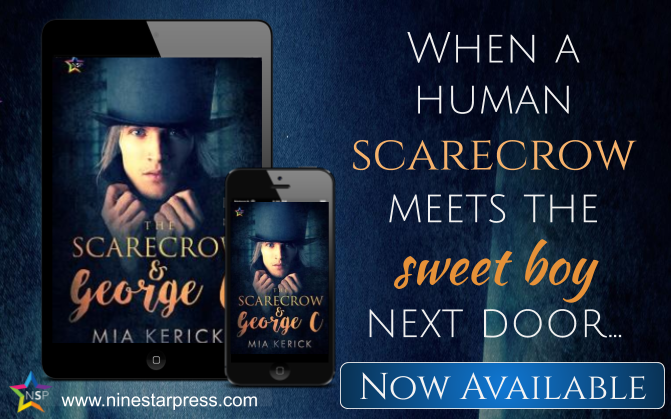 Mia Kerick is the mother of four exceptional children—one in law school, another at a dance conservatory, a third studying at Mia’s alma mater, Boston College, and her lone son still in high school. She has published more than twenty books of LGBTQ romance when not editing National Honor Society essays, offering opinions on college and law school applications, helping to create dance bios, and reviewing English papers. Her husband of twenty-five years has been told by many that he has the patience of Job, but don’t ask Mia about this, as it is a sensitive subject.

Mia focuses her stories on the emotional growth of troubled young people and their relationships. She has a great affinity for the tortured hero in literature, and as a teen, Mia filled spiral-bound notebooks with tales of tortured heroes and stuffed them under her mattress for safekeeping. She is thankful to NineStar Press for providing her with an alternate place to stash her stories.

Her books have been featured in Kirkus Reviews magazine, and have won Rainbow Awards for Best Transgender Contemporary Romance and Best YA Lesbian Fiction, a Reader Views’ Book by Book Publicity Literary Award, the Jack Eadon Award for Best Book in Contemporary Drama, an Indie Fab Award, and a Royal Dragonfly Award for Cultural Diversity, among other awards.

Mia Kerick is a social liberal and cheers for each and every victory made in the name of human rights. Her only major regret: never having taken typing or computer class in school, destining her to a life consumed with two-fingered pecking and constant prayer to the Gods of Technology. Contact Mia at miakerick@gmail.com or visit at http://www.miakerickya.com to see what is going on in Mia’s world.