Dane hasn’t spoken with his mother in years and he’s never met his father. But somehow his mother finds out about Mercury and the kits anyway, and it’s difficult to throw one’s mother out when she happens to be a powerful, dangerous witch.

She isn’t the only uninvited guest, and the others are even less likely to take no for an answer—and much more likely to leave everyone dead if they don’t get what they want.

Chapter One
Saturday-morning breakfast was always chaotic. With seven kits running around, it was inevitable, and Daisy—the babysitter/housekeeper who helped to look after the kits—had weekends off. Daisy somehow managed to corral all the kits into line for breakfast, lunch, and dinner and got them to their lessons with their tutor on time. Dane, on the other hand, was lucky he still had a standing kitchen.

Lumie and Alloy were chasing each other in circles around the kitchen island, yelling excitedly about something. Their words were too garbled for Dane to catch. Lumie’s red hair kept flashing by, followed by Alloy’s mix of blue-and-red hair. Copper and Zinc were yelling at each other from opposite sides of the island. Their argument stemmed from something that had gotten spilled in the bathroom, which might also explain why Copper smelled particularly flowery this morning. Copper would probably smell like that for days; as a fire dragon, he avoided proper baths as much as possible. Even though he was eight years older than his youngest siblings—much too old to be skipping baths—his hair was the same shade of red as Lumie’s and Alloy’s. Zinc was an air dragon the same age as Copper. Her hair was white and she kept it in one long braid down her back to avoid getting it tangled in her magic.

Chrome and ’Ron were also arguing—this time about frogs. Why? Dane couldn’t even fathom a guess. The answer might scar him for life. Over the last year, ’Ron had cut her brown hair into long spikes and had traded frilly dresses for sparkly pairs of jeans. She was still cleaner and more put together than Chrome, whose brown hair was actually longer than hers and usually contained a few sticks and leaves tangled in his curls, but she was more willing to go frog hunting now. Or frog dissecting. Again, Dane really didn’t want to know.

Luckily, Mercury was at the stove calmly flipping pancakes on the electric griddle. His bronze hair was long on his collar and still sleep mussed. Dane had to hide a grin because he knew exactly what had caused Mercury to look so disheveled this morning, and it wasn’t a kit-friendly topic.

“Kits who aren’t sitting quietly don’t get pancakes.” Mercury didn’t say it loudly, but he didn’t have to. Copper, Zinc, Chrome, and ’Ron immediately shut up and took their seats around the island. Lumie stopped by the spice drawer to pull out the extra-large bottle of cinnamon before he and Alloy also settled quietly into their places.

The threat of being denied pancakes was a serious one. Dane went to the pantry to grab the syrup—another extra-large bottle, because dragons were sugar fiends—and set it in front of his seat as he took his own spot at the island.

“I’m going to have to shovel the driveway this morning,” Dane said into the quiet kitchen. “I’d appreciate everyone’s help.” Copper, Lumie, and Alloy looked immediately interested—they could melt the snow with their fire magic as long as they didn’t leave puddles of water that would eventually turn the driveway into a skating rink. Nickel, the only kit who had been sitting quietly the entire time, nodded to tell Dane he was in too. He liked playing with frozen water just as much as unfrozen. Nickel was the only full water dragon living under Dane’s roof, his blue hair and bright blue eyes a stark contrast to the other kits’. Alloy had been genetically altered in the egg to have both fire and water magic, but he spent most of his time with Copper and Lumie, so fire was his preferred method of choice.

None of the kits made a peep of agreement or disagreement. The pancake rule was still in effect, apparently, but at least Dane wouldn’t be shoveling his driveway on his own.

Mercury brought the plate over and the steaming scent of buttery pancakes enveloped the table. Chrome was actually drooling, Dane thought, but he didn’t look too closely. There was a sudden popping noise and a sealed envelope appeared directly on top of the stack.

Dane knew that spell. Hell, he knew the handwriting on the envelope, just as he also knew that the sender had chosen to have it materialize on the food on purpose. Mercury pulled it from the stack of pancakes and read Dane’s name on the front, then held it out for Dane to take with a quizzical look on his face. Dane’s hand wasn’t shaking when he forced it to reach out and take the envelope from Mercury. It wasn’t, he reassured himself, but he wasn’t breathing either.

“I’m starving!” Chrome moaned. Mercury smiled at him and grabbed a fork to begin filling everyone’s plates. The syrup disappeared with alarming quickness while Dane was staring at the cramped cursive. That handwriting was so familiar and so damned frightening.

“Who is the letter from, Dane?” Mercury asked.

Dane looked up just in time to see Lumie liberally coat his syrup-drenched pancakes in cinnamon. Copper and Alloy each had their turn with the cinnamon before Dane remembered that Mercury had asked him a question.

“It’s from my mother,” Dane said as unemotionally as he could. If he didn’t suppress what he was feeling, he might start screaming or crying.

Mercury put his fork down on his plate, which was just as drenched in syrup as his kits’, and stared at Dane with his bronze eyes. “The one who’s a god?” he asked. Dane was the child of a god, something he had told Mercury before they became mates, but Dane had never gone into specifics. Mercury had seemed to sense that it was a difficult topic for Dane and had never asked for more detail.

“No,” Dane replied. “My mother is one of the few witches in the world strong enough to summon a god, though.” At Mercury’s blank look, Dane sighed. “The Isle Crone?”

Mercury’s jaw dropped. “Your mother is the Isle Crone?” he gasped.

“We have a grandma?” ’Ron added. She bounced in her seat with excitement. Mercury’s lips tightened and Dane had to hide a wince. It wasn’t Mercury’s fault that dragons in the wild had to abandon their kits so they didn’t inadvertently end up killing them over a territory dispute. Mercury didn’t have the first idea of where to find his parents or any of his siblings. Dane had a mother who was the Isle Crone and a father he had never met and probably never would.

“She’s not the cookie-baking type,” Dane tried to explain to ’Ron. She was more of the biblical-smiting type. She was the territory leader of the British Isles, and she ran her territory with an iron fist. No one dared to challenge her because she was that powerful and that ruthless. For all that, she wasn’t evil. Mostly she was controlling, and no one was allowed to live their lives outside of how she dictated. It made her one of the more well-known territory leaders in the world.

Dane had left her house as soon as he was old enough to get away. Actually, escaped her house was probably a more accurate description. He had traveled all the way across the ocean to flee from her, but that hadn’t been nearly far enough, thanks to the more modern and less taxing innovations to basic transportation magic. Luckily, she wasn’t more powerful than Dane, so she couldn’t force him to return with her magic, but she had made her displeasure known many times since then.

His favorite instance was when she had instructed the largest witch coven in England to curse him. He had managed to counter it before he found out what exactly it was supposed to do to him, but the end result, according to his mother, was supposed to have been him crawling back to her for help and falling under her thumb again. She had sent a letter much like the one he was holding to tell him how disappointed she was that he had managed to avoid that fate.

That, along with a number of other difficulties she had caused throughout the years, was why he hadn’t spoken to her in at least a decade and had hoped to go a few decades more before having to even think about her again.

“What’d she write?” Chrome asked through a mouthful of food. 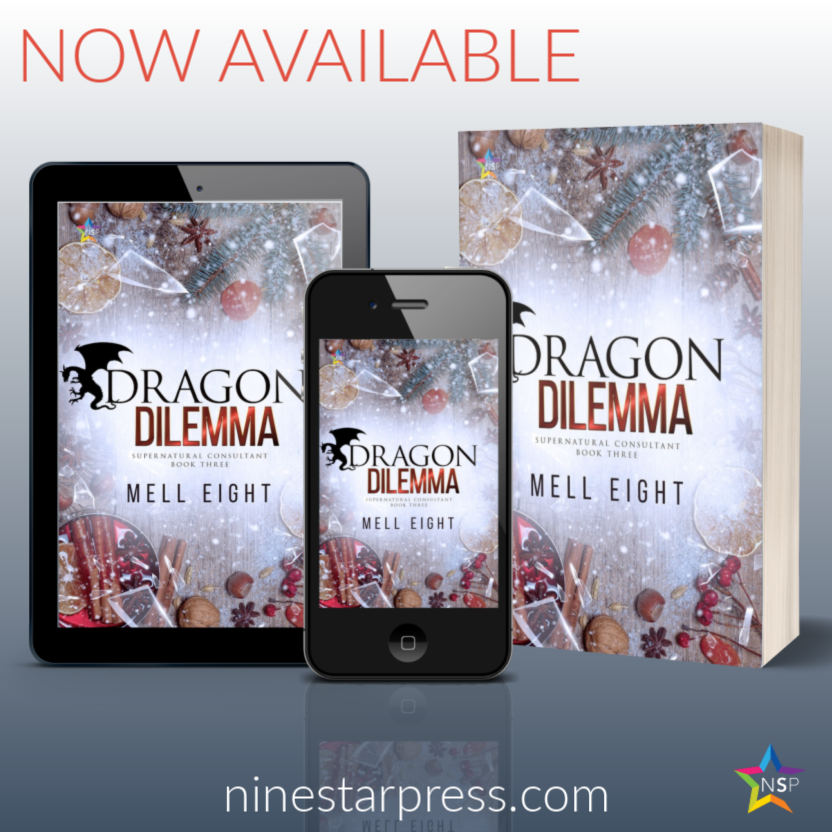 When Mell Eight was in high school, she discovered dragons. Beautiful, wondrous creatures that took her on epic adventures both to faraway lands and on journeys of the heart. Mell wanted to create dragons of her own, so she put pen to paper. Mell Eight is now known for her own soaring dragons, as well as for other wonderful characters dancing across the pages of her books. While she mostly writes paranormal or fantasy stories, she has been seen exploring the real world once or twice.