I’m driving home to Pittsburgh today so I’ll probably be slow to comment (as if I didn’t just comment to everyone last night….)

Today I’m posting the last of mine that center around the holiday. Soldiers of the Sun follows The Darkest Midnight in December that I shared two weeks ago. It’s my 1930s demon hunters, this time in Pittsburgh spanning the whole of winter as they fight a demon prince and murderous one percenters. And yes I went WAY over in an attempt to capture the dynamics of this three-way relationship. Oops.

“So I’m not getting sleep anytime soon?” Caleb eyed his partner as he unlocked the door to his apartment. Sometimes Agni surprised him. Caleb thought Agni only entered into this three-way partnership because Caleb asked, but he was beginning to think Agni truly enjoyed having sex with Temple too.

Temple stuffed his tie into his pocket. “You can sleep on the couch, I suppose.”

“As noisy as you are, if I chose that option, do you really think I’d get a moment’s rest?” Caleb slipped out of his overcoat and dress jacket, putting both on the coat rack by his door.

“Then you’ll have to join us.” Temple ran his hand across Caleb’s shoulders.

“Naturally.” Caleb turned and studied Temple’s face. “Are you okay?”

Temple shrugged. “I’m not perfect, but I will be eventually. Don’t want to talk about it now.” He fisted his fingers in Caleb’s starched shirt, pulling him forward into a kiss. “And I get the middle tonight since I earned it. All you did in the fight was stand there looking pretty.”

“And how was I to know which way the demons would run?” Caleb protested, breaking free. He caught Agni’s hand, tugging him toward his bedroom.

Temple followed behind them. “You’re smart. It sounds planned to me.”

“Keep talking, Temple, and your boyfriend for tonight will be found at the end of your wrist,” Caleb volleyed back.

Temple pouted, but he didn’t look particularly sad. “Ouch, you can be so mean.”

Caleb couldn’t hide his grin. If baiting Temple made him less morose, Caleb was happy to do it. It was so very easy to get his goat, anyhow. “You love it when I am.”

“Do not.” Temple’s sulk deepened.

“I have to side with Caleb. You thrive on us being hard on you.” Agni reached back to swat Temple’s arm.

Temple narrowed his green eyes. “I’m beginning to think my hand is the better choice.”

“At least your hand wouldn’t be mean to you,” Caleb agreed.

“And it would do exactly what you want.” Agni grinned.

“You two are just lucky I like you,” Temple huffed. “And I know you’re both damaged, and this is the only way you can show affection.”

Blurb Caleb Davies and Agni Pradesh are worried about their teammate and lover, Temple Chevalier. Not only has he lost his long-time partner, Fu Li, but he nearly died fighting a demon himself. Also, Temple isn’t sure he’s ready for a new teammate after Li. Caleb and Agni are even more concerned that their three-way relationship with Temple exists less because he loves them and more because he’s hiding from the pain of Li’s loss.

1932 shapes up to be a terrible year for the Soldiers as they welcome the New Year fighting demons and then end up investigating a case that pairs them up with the Knights Templar. This would normally be a good thing, but it forces Temple to face his painful past. Worse yet, the case leads right to Astaroth, a Prince of Hell, who might prove to be an unbeatable foe. 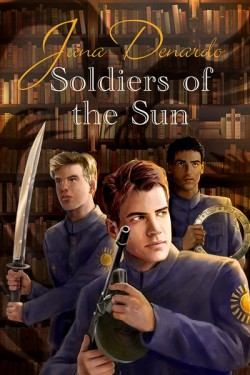